Canmore is located 81 km west of Calgary in the Rocky Mountains of Alberta. This is the ninth-largest city in Alberta, and as of 2020, it had a population of around 16,000. Although the town was founded in 1884, it didn’t become incorporated until 1966. Originally, Canmore was a coal mining town. However, over the years, it has become a tourist destination. The town and the surrounding area are beautiful, and it is now a haven for those who want to live in luxury within a rural setting.

Canmore is home to a number of writers, photographers and painters. The picturesque nature of the area has made it a popular filming location as well. Some of the films that were shot, at least in part, in and around Canmore include Legends of the Fall, The Assassination of Jesse James by the Coward Robert Ford and Brokeback Mountain.

As it continues to grow, Canmore is a popular place to buy real estate.  There are a number of options in the various communities for those seeking a high-end property.

What You Can See and Do in Canmore 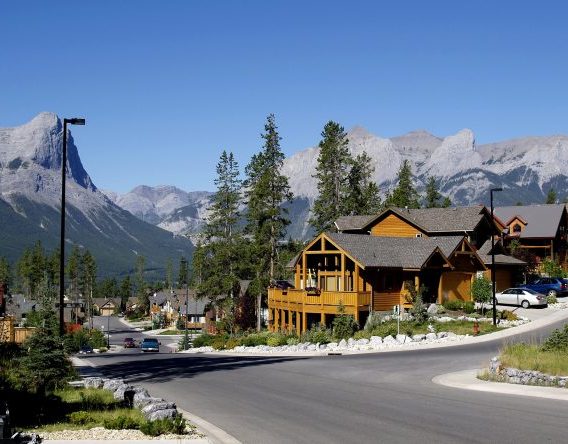 Canmore has plenty of interesting activities and attractions for visitors and locals alike. The Canmore Museum and Geoscience Centre is a popular spot, as are the Canmore Nordic Centre and Elevation Place. Those who want to get out and explore nature will love that Grassi Lakes and Banff National Park, both of which are very close by.

The town is home to a range of festivals throughout the year. In April you can experience Canmore Uncorked, a culinary celebration. The Canmore Winter Carnival, the Canmore Folk Music Festival, and Canmore Miners’ Day Reunion are always popular events too.

Some of the places to dine in the area include Where the Buffalo Roam Saloon, The Wood Restaurant & Lounge, and Rocky Mountain Flatbread Co.

You will find that the properties in Canmore are more expensive than homes in most other parts of Alberta. In addition to properties for sale, you can also find Canmore apartments for rent in some areas. Below are some of the most popular neighbourhoods in the town.

Cougar Creek is found at the base of Grotto Mountain with many of the properties constructed in the 80s and 90s. The downtown area is within walking distance. You can find detached homes, duplexes, and apartments available here.

Located near the downtown area on the western side of Main Street, this neighbourhood is a great option for those who want to be close to things to do. It is near shops and restaurants and there are parks for those who want to get outside and enjoy nature. You will find a lot of single-family properties here.

Spring Creek features apartments, a senior centre, large estate homes and more. There are many options for those looking for Canmore homes for sale.

This community is located south of Main Street near the Bow River and the community of Spring Creek. The neighbourhood has a range of different types of homes including single-family residential homes, townhouses and condos.

TeePee Town is found on the east side of Bow Valley Trail and is another popular location. It is not far from the downtown area, and it is close to a range of recreational activities. You will find a lot of detached single-family homes here, but there are some duplexes in the area as well.

These are just some of the popular communities in Canmore. Get in touch with a Canmore realtor to learn more about these and other neighbourhoods to find a home that will work well for you.

Getting Around in Canmore

Many people in Canmore opt to have vehicles of their own to get around the city. However, there is also a local bus line. ROAM is the public transit service in Bow Valley, which has a regional bus service that operates between Banff and Canmore. The town is also bike friendly, and you can find many bike trails, as well as walking trails.

BACK TO CITY GUIDE