Century 21 held its first annual ‘Day of Giving’ this summer and CENTURY 21 Canada network members took the opportunity to get hands-on and help out at one of the many summer camps run by Easter Seals Canada.

Blair Gordon, owner of CENTURY 21 Foothills in Calgary visited Camp Horizon, where Easter Seals provides unforgettable summer camp experiences to kids and teens living with disabilities. “When we learned we had the opportunity to visit the Easter Seals camp again, we had an overwhelming response,” says Blair. “Our brokerage is dedicated to supporting Easter Seals, and our tour of the camp was a reminder of the magnitude of effort and care that is given to the campers each and every day.”

Activities for the visiting C21-ers included cleaning windows, weeding flowerbeds, landscaping and working on the camp’s pool to help transform it into a spray park area.

Jarred Jones and Charles Zhang, members of the Home Sweet Home team from CENTURY 21 Bamber Realty decided to participate in the Day of Giving initiative due to their longstanding support of Easter Seals. “We’ve been out to Camp Horizon a few times but this was our first visit in a couple of years and our experience was incredible,” says Jared. “It was beautiful weather and a memorable day and we felt like we were able to help make a difference.”

The C21 members had the opportunity to visit when camp was in full swing, allowing them to see just how much joy the campers get out of their time there. “There’s nothing that matches the feeling of watching the campers get to enjoy the activities that are happening. We saw singing sessions, water gun fights, tree-top rope courses, t-shirt tie-dying and so much more. There were endless smiles and laughs which was amazing to see. We got the opportunity to catch up with a camper we had met on a previous visit and he looked like he was having the best day.”

Though they were only there for a day, it was a big reminder of why the partnership between Easter Seals and CENTURY 21 Canada is so important. “Our team has always been avid supporters of Easter Seals, it’s our go-to foundation to support,” Jared explains. “We’ve witnessed the impact that they have on the campers, all you have to do is spend one day on-site to see all the moving parts and resources that are required to make camp possible. The experiences the campers have are life changing.”

Though the day at camp is over, the support from C21-ers will continue, with CENTURY 21 Foothills planning for their annual golf tournament with a fundraising goal of $110,000. As a whole, CENTURY 21 Canada aims to raise a grand total of $750,000 this year for Easter Seals through the Kids to Camp program which has raised over $13 million since they began their support in 1979.

To learn more about the Kids to Camp program, visit their website: www.c21kidstocamp.ca 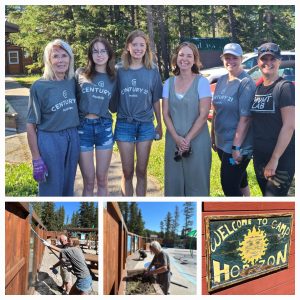