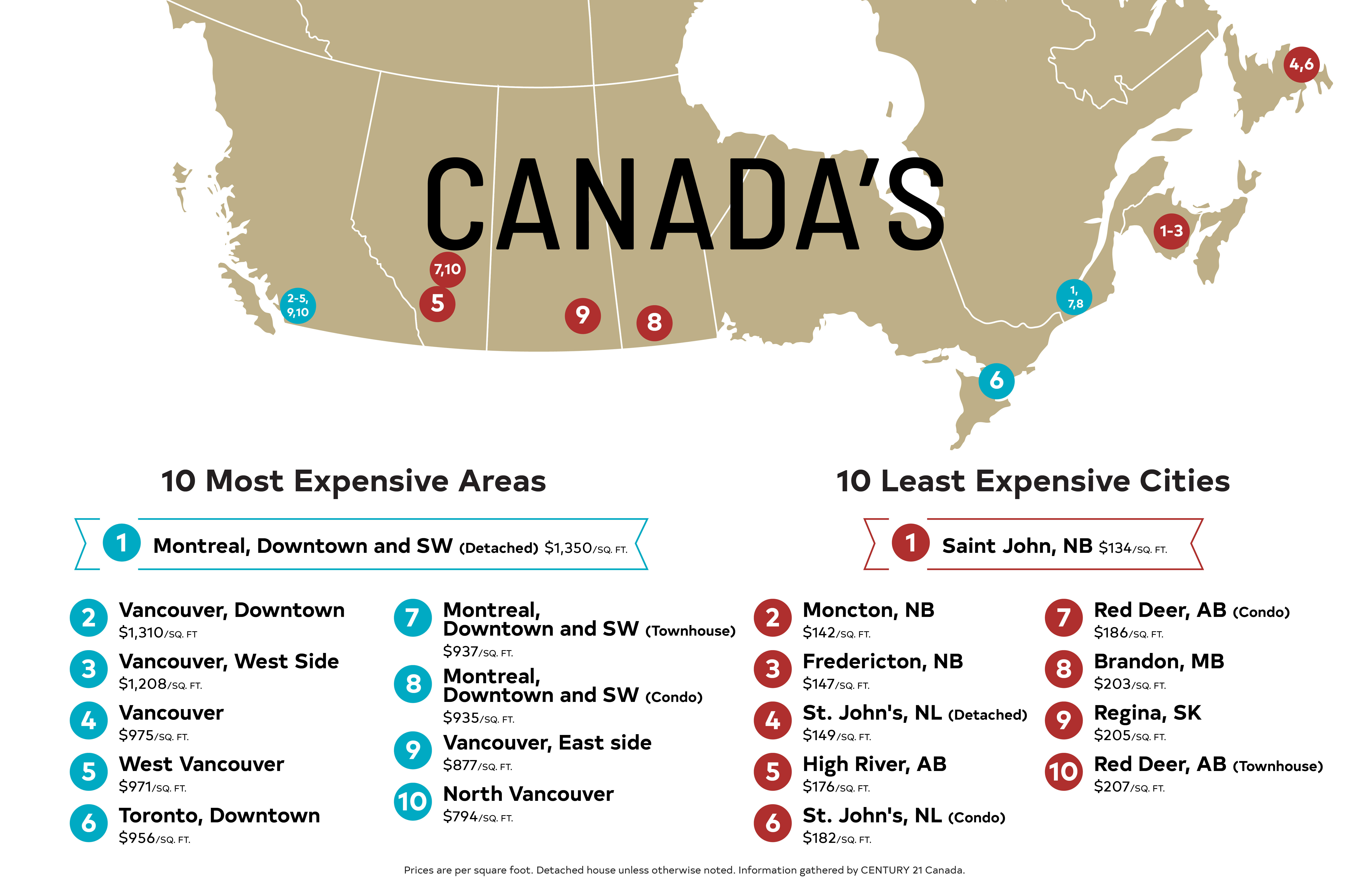 Vancouver (August 11, 2021) – House prices across Canada have grown significantly over the past year, particularly in Atlantic Canada and more recreational locations, despite the COVID-19 pandemic. The fifth annual Price per Square Foot survey is being released by CENTURY 21 Canada and shows that real estate continues to be an excellent investment for Canadians. While real estate is most often dependent on the local market, the past year has seen widespread increases in prices from coast to coast.

In its annual, nationwide study, CENTURY 21 Canada compared the price per square foot of properties sold between January 1 and June 30 this year, compared to the same period last year.

“Looking at the prices across Canada, there isn’t one region that hasn’t seen price growth in the past year,” says Brian Rushton, Executive Vice-President of CENTURY 21 Canada. “When the pandemic began in 2020, the market became unchartered territory. But because of low inventory and high demand from buyers looking for a larger space, prices have steadily climbed for the past year, particularly detached homes. Over the past couple of months, that growth has slowed and condo prices have started increasing again– it’s still a seller’s market from Victoria to St. John’s.”

When COVID-19 began to take hold in spring 2020, the belief was that the market would struggle. However, after an initial dip, pent up demand for housing, particularly detached homes, increased prices throughout last fall and earlier this year, in part due to a lack of supply. As evidenced in the data, prices in central major metros have been softer than those in traditionally less expensive markets like Owen Sound and Atlantic Canada.

Rushton says prices have moderated over the past couple of months. “This is typical of what we see through the summer months, but all signs are pointing to another busy fall as inventory across the country continues to be low with plenty of buyers waiting to make a move as soon as they can.” 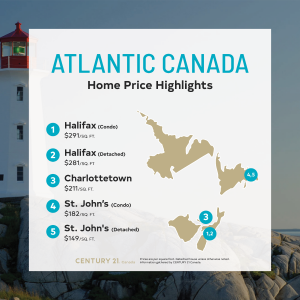 Atlantic Canada has long been seen as the most affordable region in Canada for housing. But over the past year, prices have consistently increased with work from home becoming a viable option for many workers. Halifax has seen the biggest increase in prices, but Charlottetown, Fredericton, Moncton, and St. John’s are all seeing double-digit increases.

“Because we are still affordable, people are flocking here,” says Paul Burns, Manager at CENTURY 21 A&T Countryside Realty. “Between people from Ontario finding that they can afford a home in Atlantic Canada, newcomers increasingly locating here, and locals who want to stay, this region is seeing prices we’ve never seen before.” 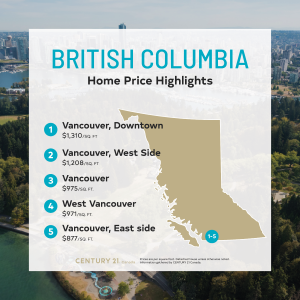 BC real estate is the most expensive in the country and remains so again this year. Prices in the outskirts of the city saw the largest increase with Chilliwack prices up over 40 percent to $406 per square foot, Delta up 38 percent to $50 per square foot and White Rock/South Surrey up 44 percent to $625 per square foot. Kelowna also saw solid increases with prices up anywhere between 20 and 30 percent, depending on what home type the consumer is choosing. 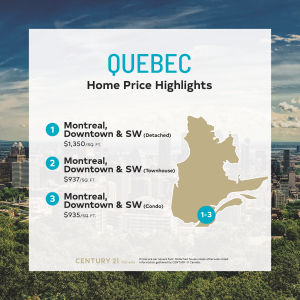 Real estate in Quebec has been strong for several years now. Yet again, prices increased significantly since last year, with the price of a detached house in Montreal’s downtown and southwest rising 41 percent to $1350 per square foot while townhouses increased 22 percent to $937 per square foot and condos 16 percent to $935. Over the past five years prices in Montreal have essentially caught up to those in Vancouver and Toronto. “Montreal saw affordable prices for many years, but people saw the value in this city and the cost of a home is now on par with other major cities in the country,” says Mohamad Al-Hajj, owner of CENTURY 21 Immo-Plus in Montreal. 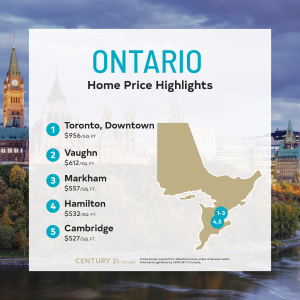 2019 to 2020 saw modest growth in Ontario, and the past year has seen even bigger increases. Most notably, the prices in Owen Sound and Grey Bruce are up more than 80 percent. “Demand has been off the charts,” says Mike Seiler, owner of CENTURY 21 In Studio Realty. “Our clients are moving up from Toronto now that they can work from home. People are also realizing how much more space you can get once you get out of the metro area.”

Suburbs have all seen double-digit increases in prices, with the highest in those communities that are just a little outside a regular commute. “Now that people are commuting a few times a week rather than every day, they’re willing to be a bit further from their jobs in order to secure a bigger home at a more affordable price,” says Eryn Richardson of CENTURY 21 Heritage Group.

Prices in downtown Toronto condos were actually slightly down for the first six months of the year, but are coming back strong. 2021 started with lower prices than we saw in the initial pandemic, but have increased as the year went on. Ottawa condos were also down year over year but, they too are rebounding as 2021 continues. 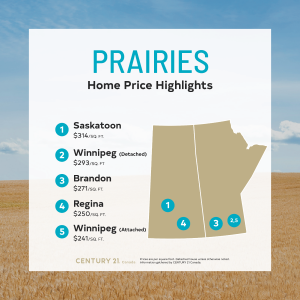 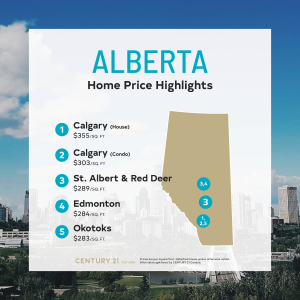 Many markets in Alberta saw decreases in previous surveys but are up anywhere from three to fifteen percent depending on the city and home type. Like many markets around the country, detached homes have seen the largest increases compared to other home types. Red Deer and High River saw the highest house increases, with prices at $289 per square foot and $271 respectively. Condos in St. Albert are the other standout in Alberta real estate with a nearly 19 per cent increase to $251 per square foot, which is still among the most affordable in the country. 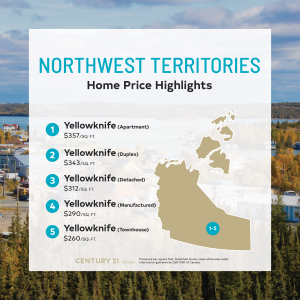 Even Yellowknife properties have seen an increase in prices. Both houses and duplexes have seen double digit increases while other house types have seen more subtle changes.

“This is the fifth consecutive year we have done this survey and, while previous years showed that real estate is a local story, we have seen widespread increases across the country this year,” says Mr. Rushton. “Real estate is security—both emotional and physical—and after the pandemic people continue to want to invest in the places they want to spend the most time.”

CENTURY 21 Canada’s annual survey of data on the price per square foot (PPSF) of properties gathers and compares sales data from its franchises across Canada from January 1 to June 30 of each year. By looking at the price per square foot at the same time each year the firm is able to get a good idea of how prices have changed over time for similar properties. This year’s survey compares 2020 prices with this year’s results. 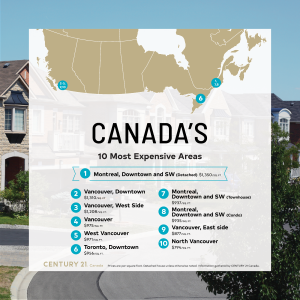 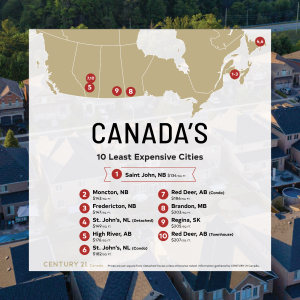